When we think of Australia, images of kangaroos, koalas, the Great Barrier Reef and Sydney Opera House spring to mind but how much do you really know about Australia? Here we explain how Australia became the country it is today, from a few British penal colonies to a flourishing multi-cultural society and one of the richest nations on earth.

Australia is in the southern hemisphere, its nearest neighbors are Indonesia and Papua New Guinea to the north and New Zealand to the east. 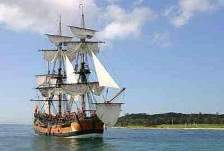 Australia has been populated by indigenous people for over 40,000 years but the first European to land in Australia was Willem Janszoon, a Dutch navigator and colonial governor in 1606. He didn’t realize he had discovered a new continent thinking instead that he was in the southerly extension of New Guinea. He landed in Australia again in 1618, this time thinking he was on a small island.

Another early European who would have seen Australia and not realized what he was looking at was Luís Vaz de Torres as he sailed through what is now known as the Torres Strait in 1606.

In 1616 another Dutchman, Dirk Hartog, became the second European to land in Australia going ashore in what is now Shark Bay in Western Australia. He left behind a plate nailed to a post to record his visit.

Abel Tasman made two voyages to Australia, the first in 1642 when he discovered Tasmania but then he named it Van Diemen’s Land. He mapped the entire north coast of Australia during his second voyage in 1644.

It was over century later when Europeans were to explore Australia again in 1770, this time it was Captain James Cook on the HMS Endeavor. His expedition became the first recorded Europeans to see the East coast of Australia which he named New South Wales and claimed as British territory.

Matthew Flinders was the first man to circumnavigate Australia and identify it as a continent in 1803.

When did the British settle in Australia?

With the loss of the American colonies in 1780, the British government sent a fleet of ships, the “first fleet”, to set up a penal colony in New South Wales. The British flag was raised at Sydney Cove on January 26th 1788, a date which became Australia National Day.

A second colony was established in Van Diemen’s Land (now Tasmania) in 1803 and the western part of what is now Western Australia (the Swan River colony) was claimed by the United Kingdom in 1828. Separate colonies were formed from New South Wales: South Australia in 1836, Victoria in 1851 and Queensland in 1859. The Northern Territory was founded in 1911 when it was created from the northern part from South Australia.

How big is Australia?

Put into perspective, the UK can fit into Australia 31 times.

What’s the population of Australia?

The 2014 population is estimated at 23,493,715. It has grown by nearly two million people in the last three years. From the Second World War to now, nearly 8,000,000 people have immigrated to Australia, mostly from Europe.

Where do most people live?

As most of Australia is desert with a very dry, hot and inhospitable climate, the vast majority of the people live in and around the major coastal cities such as Sydney in New South Wales, Melbourne in Victoria, Brisbane in Queensland, Perth in Western Australia and Darwin in the Northern Territories. Sydney is the largest city in Australia with a population of 4.7 million although Melbourne, Victoria is not far behind with 4.3 million people.

Why is the Queen on the money?

This is because Australia, independent from Britain for many years, is part of the Commonwealth of which the Queen is head of state. This is also why Australia doesn’t have a president because it is a monarchy and not a republic. Australia, like the UK, has a prime minister who is currently Tony Abbott.

What Language do they speak in Australia?

There is no official language in Australia but as most of the population originates from the UK and or Ireland, about 81% of the population speaks English at home. The next common languages spoken, though all under 2% are: Mandarin Chinese, Italian, Arabic, Cantonese, Greek and Vietnamese.

Before the European settlers began arriving in Australia there were between 200 and 300 different indigenous Australian languages but over the years many have died out and only about 70 remain. Eighteen of these surviving indigenous languages are spoken by all generations, the rest are only spoken by the elderly.

As with the USA, due to the sheer size of Australia, it has six major climate zones but doesn’t experience the extreme temperature differences seen in the northern hemisphere. Australia, as you can see from the map below, is mostly desert which is almost uninhabitable as it is so hot and dry with almost no rainfall during the course of a year.

Most of the population live in the coastal regions of New South Wales and Victoria in the south east of the country. There are also population concentrations to the east around Brisbane and the Gold Coast in Queensland, Adelaide on the south coast and Perth in the south west.
The desert and semi-arid grasslands are for the most part sparsely inhabited by the indigenous people of Australia.

Tropical – This region of Australia is found in the north of the country in the upper parts of Queensland and the Northern Territory. Here you can expect hot weather the whole year round. This climate differs from the desert and semi-arid climates in that it has a pronounced rainy season. Darwin and Cairns are the only major cities in the climate.

Desert – This climatic region covers the largest part of Australia, in fact most on central and western Australia are desert. Here you can expect extremely hot weather with almost no rainfall all year round. With the exception of Alice Springs, there are no major towns or cities in this region.

Semi-arid (Steppes or Grassland) – Regions that receive very little rainfall and are characterized by grassland. The semi-arid climate almost completley surrounds the desert in Austrlia. There are no major cities in this climatic region in Australia.

Mediterranean – This climate can be found in the south west and south of Australia. Here you can expect hot dry summers and mild winters. Major cities in this climatic region are Perth in Western Australia and Adelaide in South Australia.

Humid subtropical – Hot humid summers and mild cool winters, to the east of Austrlia, in this climatic region you will find Brisbane and Sydney

Oceanic – At the south east tip of Australia in Victoria and New South Wales is where you will find this climate. It features warm not hot summers and cool but not cold winters. Melbourne is the major city to be found in this climate. Tasmania also has an Oceanic climate. 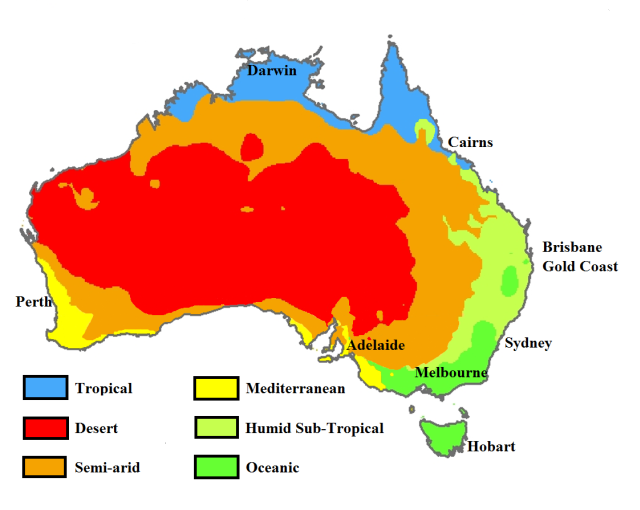