The Land of the Free! Fast food, Hollywood, Coca Cola and Disneyland! There is much more to the US than this. For example, because the United States is entirely populated by immigrants and descendants of immigrants, excluding Native Americans of course, it has lots of rich and diverse cultures represented by the many peoples that have migrated there since Columbus discovered it back in 1492. Here we take you back and explain briefly how America came to be and how it functions today as the most powerful nation on earth.

What is the United States? 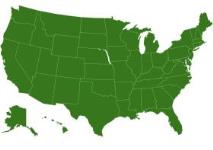 The United States has been in existence as an independent country since 1776. Originally there were 13 colonies which became states after the War of Independence with Britain but now there are 50. Of these states, 48 are located on the continent of North America between Canada to the north and Mexico to the South. Alaska, separated from the main body of the USA, is located to the north-west of Canada and Hawaii is in the Pacific Ocean.

There are some small dependencies around the world such as Puerto Rico and American Samoa.

How big is the United States of America?

The USA is the fourth largest country in the world by total land area after Russia, Canada and China.

What is the population of the USA?

Currently The USA has a population of 317,592,000 people. The population of the US almost quadrupled during the 20th century from about 76,000,000 in 1900. This makes it the third largest country in the world by population after China and India.

The United States has a very diverse population with 31 ethnic groups represented by over a million people, the main groups as follows:

White Americans: 72.4% of the population This figure includes:-

African Americans: 16.6% of the population- Americans with ancestry from sub-Saharan Africa.

Asian Americans: 4.7% of the population- This figure includes:-

Why was the war of Independence fought?

The war came about when British Parliament insisted that they had the right to tax the American colonies to finance their defense. The colonials argued that they already paid enough through local government and that “Taxation without representation” was illegal.

They formed congress and a shadow government in each state but originally wanted to remain British.

The Americans boycotted the tax which led to the “Boston Tea Party” in 1773, an event that led to ship-loads of tea being destroyed. London responded by ending self-government in Massachusetts by putting it under the control of the British army.

After repeated appeals to the monarchy to intervene with parliament fell on deaf ears, the march to war became inevitable when the newly formed American Congress were declared traitors by royal decree.

The war, originally fought by the British army and loyalist colonialists against the United States quickly became a world war when France, Holland and Spain all joined the fight against the British.

Britain, having been stretched to the limit fighting in Europe, India, the West Indies and America finally surrendered the colonies after a siege at Yorktown in 1781. All fighting ceased and the United States of America was recognized in 1783 after over eight years of war.

Who fought in the American Civil War?

The American Civil War was fought by the Unionists or the “North” on one side and the Confederacy or the “South” on the other.

In 1860 the Republican Party, led by Abraham Lincoln, had won the election and opposed the expansion of slavery in US territory.

However, the trouble started when seven slave states in the “South” declared secession from the United States and formed their own “Confederacy of United States”. Although the Republicans declared this illegal, Lincoln declared in his inaugural speech that he didn’t want war.

The “South” wrongly thought that the Europeans would side with them but none of them recognized the Confederacy.

Fighting broke out in 1861 when Confederate troops attacked Union soldiers in South Carolina. The war dragged on for four years until the surrender of the “South” in 1865.

The American Civil War was considered the first truly industrial war where railroads, the telegraph and mass production of weapons were employed extensively in addition to mobilization for war of factories, shipyards, banks and mines.

The American Civil War is still the most costly war ever fought by Americans with the loss of over 750,000 soldiers and an unknown number of civilians.

What Language is spoken in the USA?

According to Wikipedia, English is the most widely spoken language in the United States with about 80% of the population using English as their first language. Spanish, the second most used language, is spoken by 12% of the population.

Chinese is the third most widely spoken language in the USA with 0.9% of the population speaking it but this figure represents both Mandarin and Cantonese.

How does the US government work? 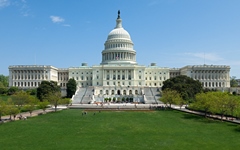 The United States is a democratic republic and has three levels of government: federal, state, and local.

The federal government has three branches:

Legislative: Congress (The Senate and the House of Representatives) makes federal law, declares war, approves treaties, has the power of the purse and has the power of impeachment, by which it can remove members of the government.

Executive: The president is the commander-in-chief of the military, can veto legislative bills before they become law (subject to Congress), appoint members of the Cabinet (subject to Senate approval) and other officers, who administer and enforce federal laws and policies.

Judicial: The Supreme Court and lower federal courts, whose judges, appointed by the president with Senate approval, interpret laws and overturn those they find unconstitutional.

The Supreme Court, led by the Chief Justice of the United States, has nine members, who serve for life.

The House of Representatives has 435 voting members, each representing a congressional district for a two-year term. House seats are apportioned among the states by population every ten years. For example some states have the minimum of one representative, while California, the most populous state, can have more than 50.

The Senate has 100 members with each state having two senators, elected to six-year terms; one third of Senate seats are up for election every other year.

The president serves a four-year term and is not allowed to serve more than two terms. The president is elected by the Electoral College System which is made up of senators and members of the House of Representatives. Each “elector” is aligned to one of the presidential candidates. This means that the presidential election isn’t one election organized by Federal Government but rather an amalgamation of simultaneous state elections where the public are voting for state senators and members of the House of Representatives.

The state governments are structured in roughly similar fashion (with the exception of Nebraska). The governor of each state is directly elected. Some state judges and cabinet officers are appointed by the governors of the respective states, while others are elected by popular vote.

Which are the main political parties in the USA?

There are two main parties in American politics, the Republicans and the Democrats.

Republican policies tend to be on the conservative side while the policies of the democrats are considered to be liberal.

The current and 45th president of the United States of America is Donald Trump, a Republican.

The weather, because of the massive size of the country, varies greatly depending on where you are. For example you could be in the middle of a blizzard in Chicago while people are sunbathing on the beach in Miami.

Whereas most small sized countries only have one type of climate, The USA has 8 distinctly different ones.

What climates are found in the USA?

These are general guides to the different climates found in the US. For example if you you look on a world climate map you will see the southern states of America and Taiwan have the same climate but Taiwan rarely sees the extreme weather often experienced in the American south such as Tornadoes and snow storms.

Semi-arid – Regions that receive very little rainfall and are characterized by grassland. Much of the mid-west falls under this category

Humid subtropical – Hot humid summers and mild cool winters, this climate can be found in the southern states of America.

Oceanic – Found in the western regions of Washington State and Oregon in the northwest of the US. This climate features warm not hot summers and cool but not cold winters.

Mediterranean – Most of California enjoys this climate of hot dry summers and mild winters.

Highland – 2 areas, one, the Cascade Mountains of Washington and Oregon and the Sierra Nevada Mountains of California. The Rocky Mountains in the Midwest is the other area. Climate is cold all year round.

Tropical – Only found on the southern tip of the Florida peninsular. Here you can expect the temperature to remain hot all year round.

Average temperatures in major US cities

What clothes should I bring?

As mentioned above, depends where you are going. For the best advice on what kind of weather conditions to expect and what clothes to bring to the USA, ask your local GetSet center.