What is the United Kingdom? Why is it also called Britain or England? Confused? Don’t worry most people are. All your questions are answered here about the UK, from its system of goverment, currency and population, right down to where the English language comes from. By the time you have finished reading this section you will be a UK expert.

Great Britain is the largest island that makes up the British Isles. The Republic of Ireland is part of the British Isles but not part of the United Kingdom. There are many Islands in the British Isles, the main other ones of note are the Isle of Man, Jersey and Guernsey, all of which are British dependencies and self governing.
Great Britain is divided into three countries, England, Scotland and Wales. This is where the name “United Kingdom” comes from, a united kingdom of four countries, England, Scotland, Wales plus Northern Ireland.

How big is the UK?

It is just under 1000 km from the northern Scottish coast to the southern coast of England. The widest point across the UK is about 500 km.

The total area is 243,000 sq km, put in perspective that’s about the size of Oregon, one of the states in the USA.

Is the UK part of Europe?

As an island nation it is not part of continental Europe but it is a European country and is part of the 27 nation European Union.

What is the currency in the UK?

The UK currency is the Pound Sterling, there are about 1.5 US dollars to the Pound. There are 100 pennies to one pound.

Who is the president of the UK?

The UK doesn’t have a president as it is a monarchy. Queen Elizabeth the second is the head of state, a mainly ceremonial position with no real ruling power. She is also the head of state of a number of Commonwealth countries such as Australia, Canada and New Zealand.

What is the Commonwealth?

This is an organization of fifty-four independent states all of which, bar two, were at some time or other part of the British Empire. The members have a combined population of 2.1 billion people or about a third of the world’s population. There are Commonwealth countries across all six of the world’s inhabited continents. The Commonwealth is not a political union but an intergovernmental organization with various objectives such as the promotion of democracy, gender and racial equality and education. The Queen is the head of the commonwealth and sixteen countries within it, others are republics or have their own monarchs.

So who governs the UK?

The political party that wins the general election, held every five years, governs the UK. The Prime Minister, who resides at 10 Downing Street in London, is the elected head of the ruling party. At present, because no one party emerged with a clear majority of votes, the UK has a coalition government. The Conservative Party formed the government because they had the most votes and the Prime Minister is David Cameron, the Conservative Party leader. The leader of the Liberal Democrats is the Deputy Prime Minister as they were invited by the Conservatives to join them in the coalition government. The other main political party in the UK, they actually finished with the second most votes, is the Labour Party.

The Houses of Parliament is in Westminster, London and is where all laws and acts in England are passed. It is split into three sections, the Head, which is the Queen, the House of Lords (members appointed by the queen on advice from the Prime Minister) and the House of Commons (members elected by the general public). Members of the House of Lords have had their powers reduced over the years because many people thought they shouldn’t be making decisions as they were appointed rather than elected, the real power is with the elected MPs in the House of Commons.

Why have a monarchy?

Queen Elizabeth II is directly descended from King Egbert, the first king to unite England, though somewhat briefly, under his rule in 829. The only interruption in the history of the Monarchy was the republic, which lasted from 1649 to 1660 when Oliver Cromwell was Lord Protector.

So today, the Queen is not only Head of State, but part of a long rich heritage and history going back over 2000 years which has made Britain what it is today. Next in line to the throne is her son Prince Charles and then his son Prince William.

What language is spoken in the UK?

The UK doesn’t have a defined official language but English is spoken by about 95% of the people. Welsh, one of the ancient languages of Britain, is now only spoken by about 20% of Welsh people. So don’t worry about learning Welsh if you are going to study in Wales as most Welsh people don’t speak it anyway. The same for Scottish Gaelic, only about 1% of the population in Scotland can speak this language.

You are far more likely to hear languages from the Indian subcontinent such as Punjabi and Bengali as there are about 5,000,000 south Asians residing in the UK. More recently, with the entry of several Eastern European nations into the European Union, you will often hear languages such as Polish and Slavic. There are also large numbers of Cantonese, Greeks and Italians in the UK making it a very colorful and multicultural society.

Where does the English language come from?

The earliest traces of Old English in Britain started to appear in the 5th century, the origins were from the Anglo-Saxons who invaded from what is now western Germany. Later, the Vikings from Scandinavia invaded further contributing to the language ensuring that it was always evolving. Old English lasted up to 1066 when it changed drastically with the Norman invasion. This brought with it a huge French influence and the start of what is now known as Middle English.

Middle English lasted from the late 11th century until 1470 when English became standardized. From 1066 for a period of about 350 years English was the third language after French and Latin but it managed to survive as it absorbed many words from lots of different language influences. Instead of discarding or replacing old words with new ones from other languages, they were all retained which is why English has so many words that have the same or similar meanings. If you have studied English as a second language, you will know what I mean. For example “sick” and “ill” one Saxon, one Viking, used to mean the same thing but now in England they have slightly different meanings.

Chancery English in 1470 was the first attempt to standardize the written form of English as some words could be spelled in about ten different ways. They mostly used dialect forms from London and east midlands but also from northern dialects if meanings were clearer.

Then came the great vowel shift in around 1550 and what is known as the start of Modern English, Shakespeare wrote his plays and sonnets in early Modern English with words easily recognized today. It was shortly after this time that English started to be exported all over the world to places like America, Canada, New Zealand, Australia, India, Malaysia, Singapore, Hong Kong, most of Africa and the West Indies. There are over a billion speakers of English in the world today.

English has words from many different languages including Latin, French, German, Greek, Indian and even Chinese.

What is the population of the UK?

Compared to other countries on the same latitude, the climate in the UK is quite mild and less extreme.

This is because the UK is an island – the surrounding water keeps the land warmer in winter but cooler in the summer. The other reason for the milder climate in the UK is the Gulf Stream.

What is the Gulf Stream?

This is a current of warm water that flows all the way up to the UK from the Gulf of Mexico. This causes the temperatures in the UK to be less severe in the winter than those experienced in contentental European countries on the same latitude as the UK.

How cold does it get?

London in the South has an average minimum night temperature of 0 degrees for January.

What are the maximum temperatures?

Although the winter temperatures from north to south don’t vary much – its cold everywhere! The South of the UK is usually warmer than the north. London in the south enjoys average highs of 22 degrees but the average temperature in Glasgow is only 19 degrees. This is because London has no coast and Glasgow is close to the Atlantic ocean. If you know your physics you will know that land heats up quicker than water.

Remember these are average temperatures, summer temperatures can get into the 30s during the summer. The record temperature for the UK is 38 degrees!

Does it rain every day?

No and the rainfall varies depending in which part of the UK you are in.

Ireland and the west coast are the wettest as they are near the Atlantic Ocean where most of the cold fronts bringing the rain originate. The east of England is the dryest part of the UK.

On average London has 14 rainy days a month. Whether or not you think this is a lot of rain should depend on where you come from. For example Taipei in Taiwan has 16 rainy days on average per month.

What clothes should I bring?

As the UK Weather is so unpredictable even if you are arriving in the summer you will need to take sun screen, a light jacket, a jumper and an umbrella in preparation for the famous four seasons in one day!

Winter arrivals need to take some good thick clothes, a hat, scarf and gloves for when you first arrive. Don’t go over the top by taking too many clothes as there are plenty of places in the UK where you can get good quality winter clothing at reasonable prices. If you are coming a warm climate, the winter clothes in your country probably won’t be thick and heavy enough for a UK winter so plan on buying most of your winter clothing on arrival.

A final word of warning. All UK public building are heated in the winter to often very high temperatures. Therefore don’t wear to many layers of clothing, such as long underwear, that you can’t take off once you are inside otherwise you will find yourself roasting in mid winter!

If you are not sure about what to take contact your local GetSet Center and we will advise you on what to take and what to buy once you get to the UK. 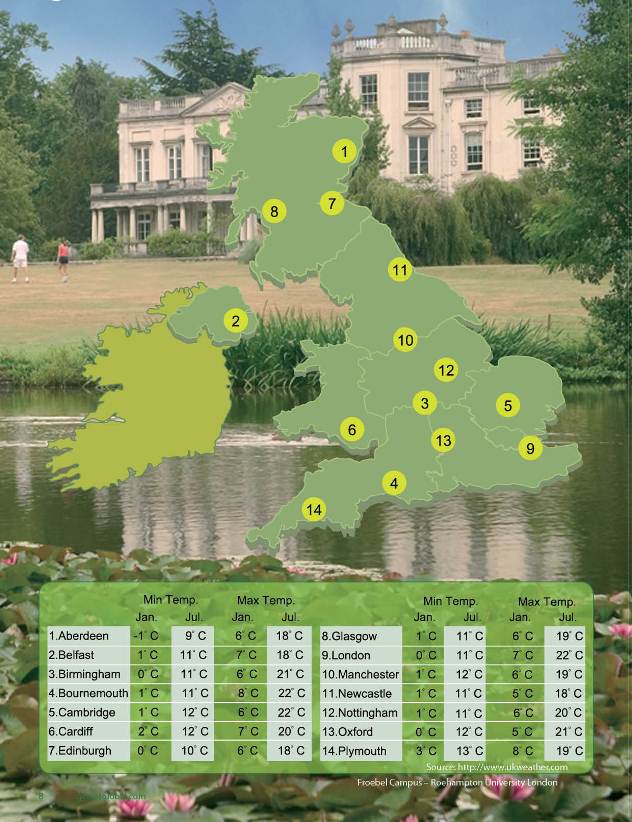 Still want to know more about the UK?

Why not contact your nearest GetSet center? Our people have been there to live and study and have an intimate knowledge all about the UK.